True, Rome is so loaded with treasures it is an open air museum. Fountains, palaces, statues and fresco’s, the city offers an overwhelming array of art work that dazzles your mind. This week hooligans and terrorists alike threatened the city, both in their own unique ways. Of course I am a neutral writer, sensitive and understanding, but if these people touch art work with just a finger, I sincerely wish they would be skillfully … (fill in random Medieval torture method). If I could give just two reasons why Rome shouldn’t ever be damaged at all, it would be because of these two miracles: the Vatican Museums and the Pantheon.

As a historian and art nerd, my pupils become wider when I hear the words ‘Vatican Museums’. There is SO much in there, art-wise, and the building itself is so grand, I would personally safeguard it all myself if that would be of any help. Of course it isn’t, which is why the Swiss monkeys, correction, guards do it. They are by themselves a pleasure to they eye and seemingly a step back into history. One point for the Vatican!

Apart from that, where to begin? The museums are so big, you will need days to see every piece. The question is whether you would enjoy that. Even I was glazed-eyed after 2 hours, with only just enough attention span left for the last room: the Sistine Chapel with the world famous ceiling of Michelangelo. It’s the last of the route, but absolutely breathtaking despite your back ache. Colorful, magical, and o.v.e.r. the top. Characters in all kinds of positions, showcasing the painter’s skill. VAST, showcasing the number of hours of work put in it. The depth in 2D pictures, showcasing a very recent discovery in the 16th century.

And, honestly, how many times do you see the face of God depicted in paintings, an act forbidden by the church?? And that in the oculus of Christianity, cool!

Unfortunately, I have no photos of the Sistine Chapel. It’s not allowed! 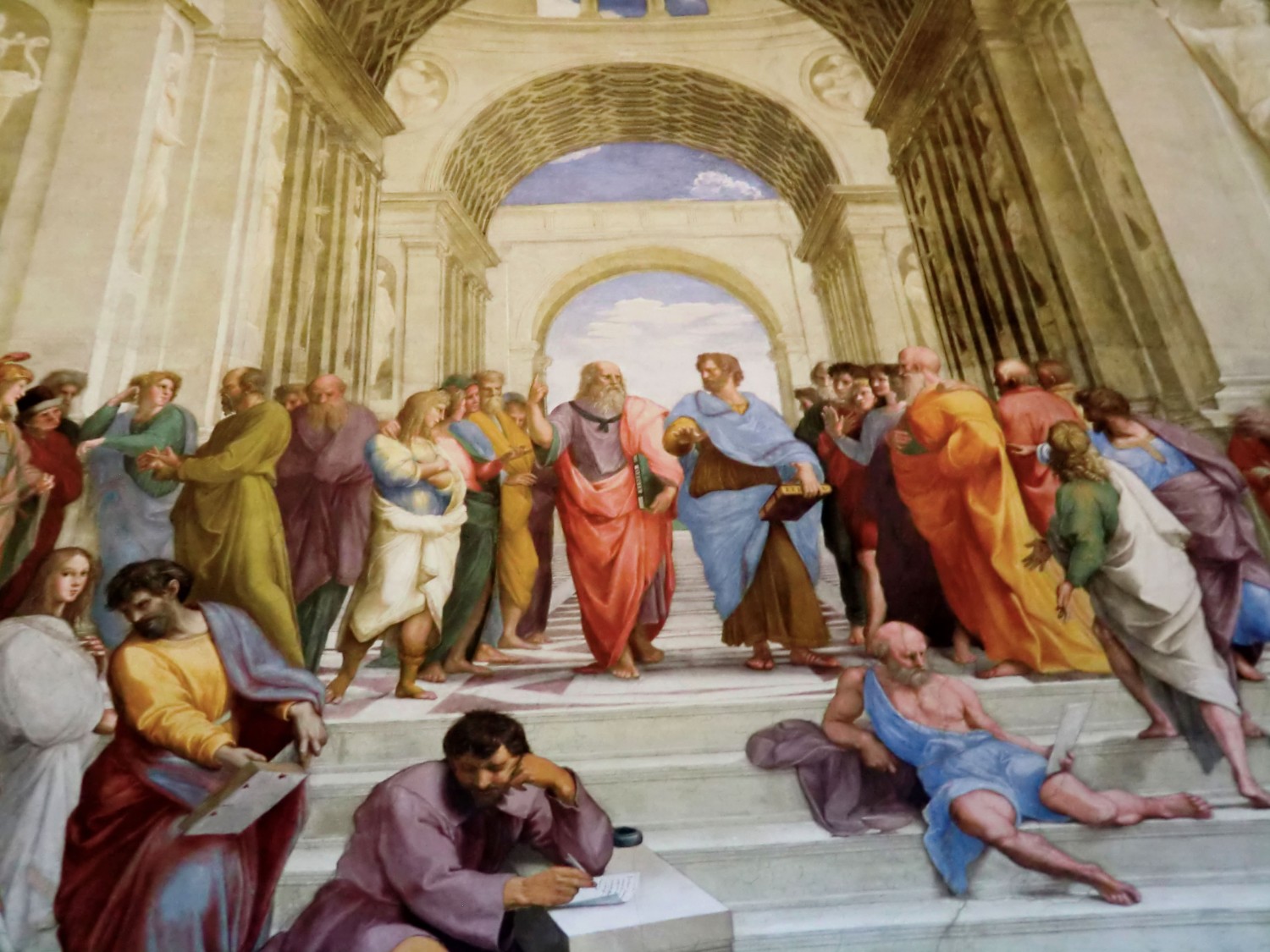 Then there is the School of Athens. This fresco by Raphael, I’m sure you’ve heard of it!, is larger than you can imagine. It is more impressive than you expect. And more beautiful than book prints will ever be able to show you. I love it. It’s the only, and I mean the only (ok except a few) non-religious depiction in the whole of the Vatican, which can be an honest relief.

The fresco shows all the great philosophers to whom we owe our way of thinking. And guys, it’s made in plaster. Meaning it was painted at once and without later alterations, as the plaster would dry up with its color inside. A master who can do this, this well! Oh and have you looked at the painted architecture, its depth? A novelty in those times, and Raphael was the best painter in the world at it. He created more realistic space in painting than any painter had ever done before him. Roar!

Well, and then you have the ceilings of the map gallery. This room shows maps of Italy of a long time ago, but the true impression is locked in the ceilings. These are dazzlingly adorned with gold painted wood and paintings. And bloody long, like so many of the galleries in the Vatican Museums. Actually, put all the loooong ceilings of the museum on this list, as one is even more impressive than the other.

There is an endless list of reasons why the Vatican Museums are priceless. You have got to see it for yourself though, because I’m going to either spoil it all or write you to sleep here. But whatever happens, go early in the day especially during summer time! Unless you like counting kilometers of concrete tiles at live turtle speed…

The second reasons Rome should never be hurt is called the Pantheon. By far my favorite building of Rome. Although ‘pantheon’ means all the gods (of the Roman religion), to me it applies more to all times. The building was adapted to every new era since its construction around 125 AD.

It started as a Roman temple soon to be adopted by emperors as a political place. In Medieval years the Pantheon served as a church, of course. Only to become partly secularized in the Renaissance, when ancient Roman architecture was admired and restored. And so it became a neo-classicist building where Italy started to bury the honored of the nation. Think Raphael, Carracci (painters), emperors and kings. It still has this function and adds to the building’s mystique. In glamorous modern times the Pantheon became a touristic destination. And a popular location for weddings..

The true beauty of the Pantheon lies in its architecture. Seen from the outside it is quite modest, though big. But the inside is nothing short of majestic. I absolutely love the cassettes in the ceiling, casting shadows that keep changing with the climate and time of day. It’s like a painting. The hole in the ceiling sets fire on the inside when the sun works (most of the time), but it can just as well rain through it. The eye makes the building flexible, but it has a legendary effect on the imagination as well. The eye of God, the space of the angles, the peacemaker between inside and out.

Adding to the mystery is the Pantheon’s dome. The largest concrete version in the world made this way. It is unenforced, meaning it has no material other than concrete to make it strong.* Imagine, without cranes and calculators! Did you know a perfect circle could be placed inside the dome, firmly hugged by it and touching the bottom on the floor at the same time? Indicating the grand skills mastered here at building in perfect proportion. Knowing this, it’s like we, modern all-rounders, are stuck in Roman times, never to exceed it until we would re-learn how to create a building like this without modern technology.

It’s this continuous back-and-forth of time that makes the Pantheon unforgettable. The passage of time, the breath of history: these kinds of exaggerated words are inspired only by a place like this. Here we can reflect on past times and the amazing things people before us have done. Here we learn about beautiful architecture and technical discoveries. If you can see this, where could you possibly find anger in your body, enough to ruin a place like Rome?