Soon we’ll be off to Paris. This will be my fifth time in the city of lights. And this time it will be with my great love. Just like last time, and all the times that will come. I’m a sucker for Paris and not only for its corny romanticism shaped in thousands of bridge locks. The main reason I am totally in awe every single time, is its stunning Parisian architecture and history.

The architecture of Paris is one of a kind, unlike any other city. I read many books about it. Every author takes you back to the nineteenth century, when the powerful baron Haussmann “redecorated” the city. He persuaded the authorities to break down parts of town in order to make way for spacious boulevards.

The official reasons was modernizing Paris and undo it from its open gutters. Unofficially though, it was supposed to help against the many bloody revolts and revolutions the city had seen. The broad boulevards would help the authorities to control the city, or, stop the neighborhoods from rising up towards the official buildings. It didn’t help much. After the finalization of the plan the Parisians continued their feisty tradition.

Without Hausmann, Paris would still be a dense city with dark alleys. After his plans the city lit up, literally. But the original neighborhoods are still my favorite. Especially the part on the western bank, Quartier Latin and Saint Germain de Pres..where you can wander endlessly (and purposelessly) through the typical streets all the way to Musée d’Orsay. In the morning you can see old men opening their little stores and women carrying bags with baguettes peeping out. The original Paris never left the Parisian. I love it. See you next week! 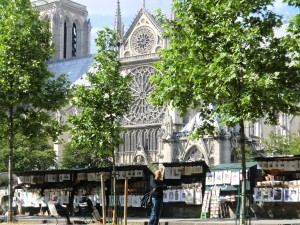