Johannes Vermeer spent time working in a hostel long before his painting Girl with the pearl earring became a hit. This hostel called De Vliegende Vos (the Running Fox) was his birth place. It’s still there, right in the center of Delft. After a spectacular 1,5 year long renovation, Herberg De Vliegende Vos reopens this July 2018 as a day café, restaurant, hotel and time capsule. Most inspiring about the project is the immense work and negotiation power that initiator Christiaan Baljé put into it to make it all happen. Read along!

Johannes Vermeer is one of the best and best known painters of the seventeenth century. His landscape painting View of Delft, hanging in museum Mauritshuis in The Hague, and portrait of the Milkmaid, hanging in Rijksmuseum Amsterdam, are among the most admired of all his work. He was the absolute master of dimmed light and subdued colors. Our opinion: if you’ve never seen work by Vermeer, you’re in serious lack of culture and need to meet the master ASAP.

Little Johannes grew up in the 17th century hostel (herberg) of his parents in Delft. His house stands just behind the famous town square on the Voldersgracht number 25. It is beyond fascinating to imagine the painter slamming beer jugs on tables of tired travelers in the hostel. Such a robust and ordinary picture in comparison to his extraordinary and refined work we know him by. This very place formed the context of the young painter. And now it reopens in its original purpose. Inspiring!

It is not known what the original interior of De Vliegende Vos looked like. But we know which pigments were popular during the early seventeenth century. We are sure what door handles looked like, which curtains our ancestors loved, and what furniture was common in a 17th century interior. Christiaan Baljé used this knowledge for refurbishing De Vliegende Vos. And so he used as much of the original materials as possible. He laid bricks with a brick laying technique identical to those in contemporary buildings. Also, he used wood from the beams, ceilings and floors to create the bar.

The result is a time capsule experience roughly 400 years after De Vliegende Vos once opened its doors for the very first time. In the back room, there will be a style room inspired by the times of Vermeer. 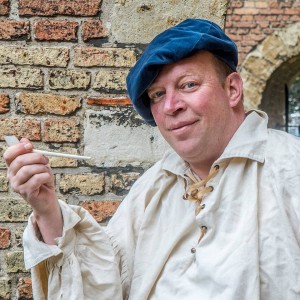 It is a true adventure to open a hostel in a national monument. As a piece of cultural heritage, there are strict rules around changing it. The amount of required licences and permits is long. Historical inspectors come by before each step and check whether constructional elements remain untouched. That’s tough. And at times almost impossible, but Christiaan Baljé made it. With a great deal of negotiation and creativity, the place reached its maximum capability within all the current monumental, constructive, and horeca rules and regulations.

Multiple careers in one lifetime

Baljé is the initiator of the project. He put all of himself into the project. He renovated the place with his own hands in 1,5 years time, only placing electronic installations out of hands. He also is the architect, drawing plans like the one at the top of this article. All of the spaces, alterations, and final use plans come from his imagination. Negotiating with local authorities and the Vermeer center, he made a financial agreement to make it happen. Finally, he involved the crowd by crowdfunding part of the renovation work.

Knowing that in his previous lifetime, Baljé did various things. He was an IT consultant, served in local government and became a business advisor. That gives the concept ‘allrounder’ a proud purpose. After all this construction work, Baljé will finally become the ‘herbergier’, working in the hostel like Vermeer. He will run the restaurant and hotel once they open.

This July 2018 the first guests stay in one of the yellow or red rooms. Traditional cupboardbeds (bedstee) and an unforgettable view of the Medieval church will make countless visitors have the time of their lives.